Advantages of our sorter 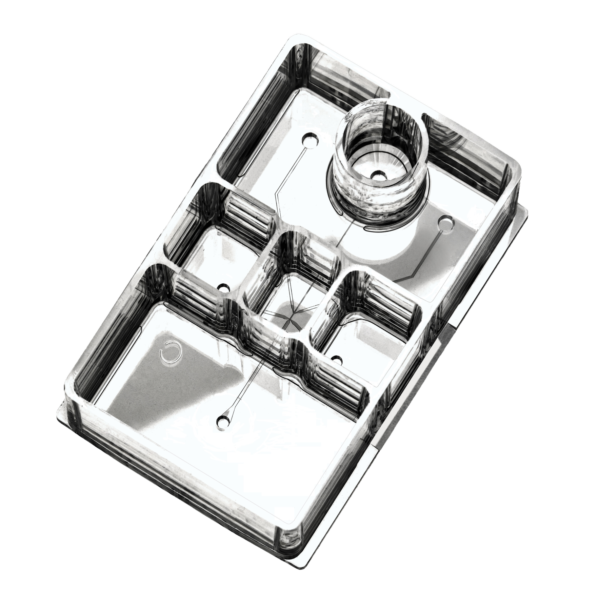 Cell damage to contamination. A cell sorter that solves the problems of conventional cell sorters altogether is here. We call it, On-chip Sort.

Utilizing the most advanced microfluidic technology and micro-molding technology, we have developed a unique “microfluidic chip-based sorting” for the first time in the world. Cell sorting has never been easier with the exchangeable chip with in-built fluidic system.

On-chip innovation beyond a cell sorter, that is what we are here to offer.
The evolution that opens new possibilities for science.

Sorting of cells by conventional cell sorters following the Jet-in-air method causes post-sorting cell changes (e.g., morphological changes, delayed cell growth, decrease in cell viability, and alterations in gene alterations) due to “sorter-induced cellular stress” (SICS, Lopez, P. (2018) CYTO2018). SICS is proposed to be induced by the use of high pressure for manipulation of sample, the large pressure differentials inside and outside the nozzle, the use of electric charges to deflect droplets into collection chamber, and high-speed collisions during collection. On-chip Sort, the world’s first microfluidic chip-based cell sorter, uses a unique sorting mechanism to eliminate all the damaging steps involved in the Jet-in-air method to significantly reduce SICS. Therefore, On-chip Sort is the solution to damage-free sorting of your precious samples.

Unlike conventional cell sorters, On-chip Sort is compact enough to fit inside a bio-safety cabinet. As On-chip Sort does not produce aerosols during sorting, it is competent to handling biohazardous samples. In addition, the use of a disposable and sterilized chip as the core of its technology allows prevention of cross-contamination between samples.

Use of any sheath fluid of your choice

In the On-chip Sort system, sample and sheath fluid flow through the microchannels by pressurizing air over the liquid. Only the target cells are isolated into the collection reservoir, and unsorted cells flow down to the waste reservoir, downstream of the microchannel. Unsorted cells are also retained on the chip for further analysis and sorting if necessary. As this cell sorting mechanism works on the basis of regulating liquid flow inside the microchannels, the use of a wide variety of liquids for the sheath fluid is possible. For instance, culture medium, sea water and oil can be used as the sheath fluid for sorting of cells, marine organisms and water-in-oil emulsion droplets, respectively.

Conventional cell sorters use nozzle in its sorting mechanism, which limit the size of cells that can be sorted (up to one-third of the nozzle size). On-chip Sort, on the other hand, utilizes the full width and height of the channel, allowing for sorting of cell clusters, such as spheroids, tissue microdissections, and organoids, up to 150 µm in size.

With the use of our disposable microfluidic chip and the unique damage-free sorting technology, multi-step sorting can be performed on On-chip Sort to isolate a rare population of cells from a highly concentrated heterogenous sample. Multi-step sorting works by using liquid pulses to deflect a target cell and its surrounding non-target cells into the collection reservoir at the first sort. During the second sort, the isolated cells are reintroduced into the sample reservoir and re-sorted further to reduce the number of non-target cells and enrich the sorted cells even further.

The operation of On-chip is easy. Lasers are only turned on during analysis and sorting, hence no warm-up time is required. The workflow involves loading sample and sheath fluid onto the microfluidic chip, placing the chip in a chip holder, and then loading into the sorter. Sorting starts after a sorting gate is selected. As all the liquid on the chip is driven by air pressure, no liquid will be in contact with any parts of the instrument. When experiment is complete, simply dispose the chip. On-chip Sort can be turned off without any washing or cool-down procedures.