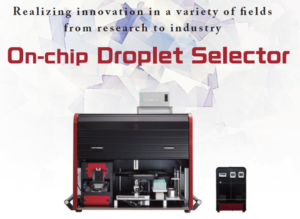 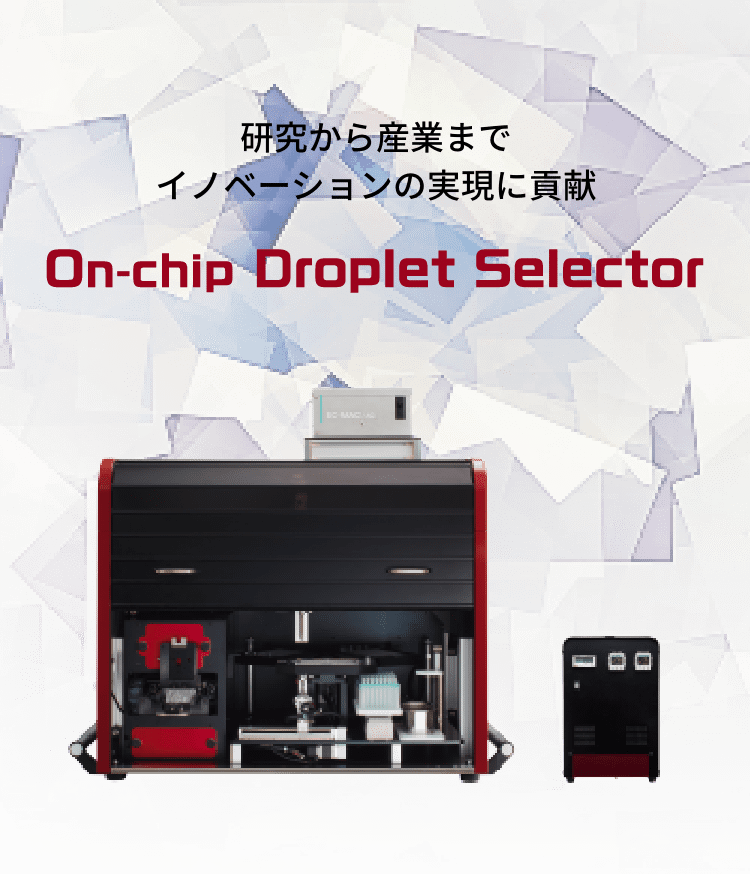 On-chip® Droplet Selector is a device that enables separation of desired water-in-oil (W/O) droplets and direct dispensing of single droplets into well plates. With conventional cell sorters, handling droplets in oil is not possible due to the difficulty in using oil as the sheath fluid and the droplets’ lack of resistance to physical shock. This makes secondary analysis and isolation of droplets containing cells/microorganisms difficult. With the use of On-chip® Droplet Selector, the time and effort of droplet screening and dispensing can be greatly reduced. On-chip® Droplet Selector is useful in applications including investigation of novel microorganisms in the environment, establishment of high-producing stains and screening of antibody-producing cells. 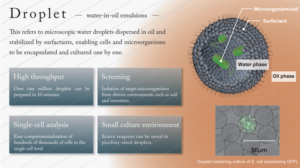 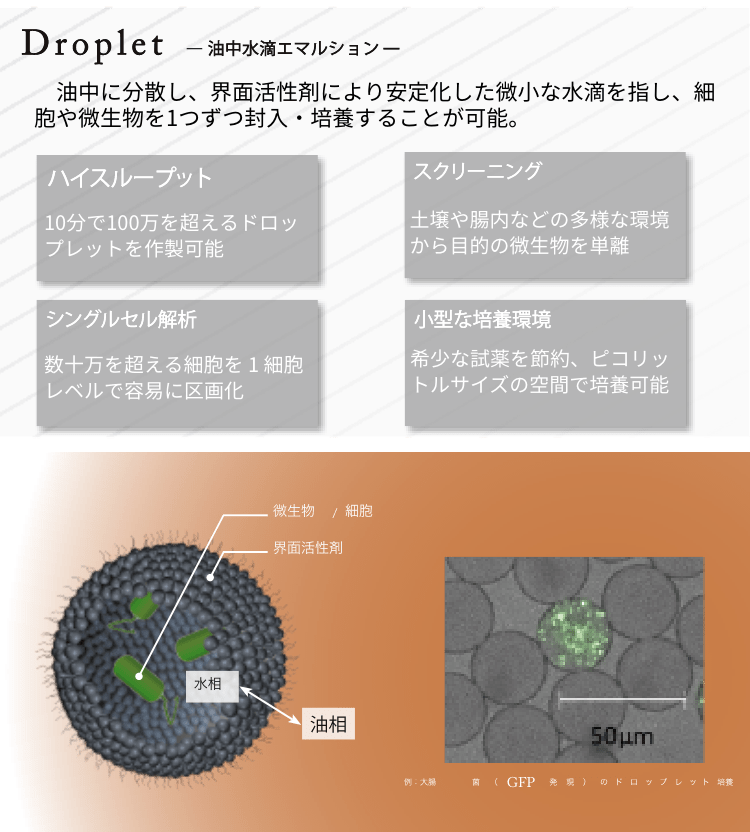 Droplets can be used in a wide range of applications including cultivation of microbial dark matter, drug screening and acquisition of mutant strains.

On-chip® Droplet Selector combines the sorting of desired W/O droplets with our microfluidic chip technology and dispensing of single sorted droplets into a 96- or 384-well plate. Droplets can be dispensed without breakage, with accuracy of over 90%. 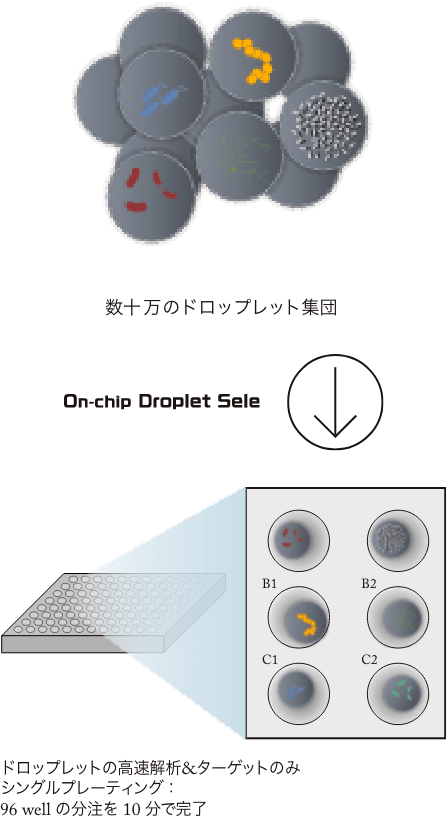 W/O emulsion droplets encapsulating target microorganisms from the environment such as soil and intestines can be sorted and dispensed into a 96-well plate in 10 min.

The use of disposable microfluidic chip eliminates the risk of cross-contamination between samples. The HEPA filter on On-chip® Droplet Selector keeps the air inside the instrument clean. The instrument can also fit inside an anaerobic chamber.

Analysis or sorting can start in less than 5 min after start-up. There is no maintenance required as none of the sample and sheath fluid come in contact with the instrument. The microfluidic chip can be disposed after experiment is finished. 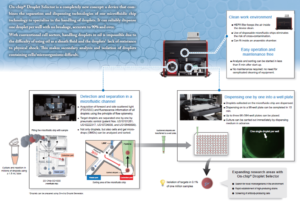 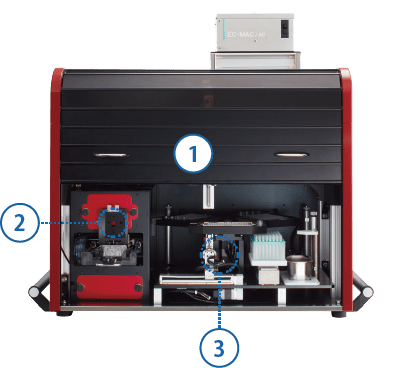 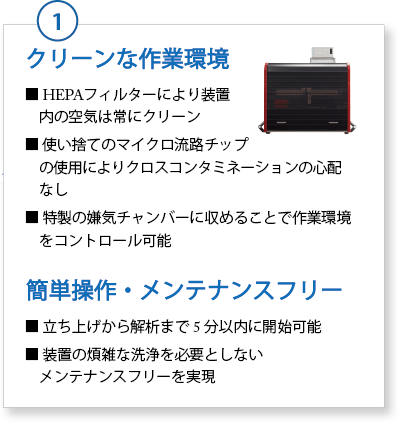 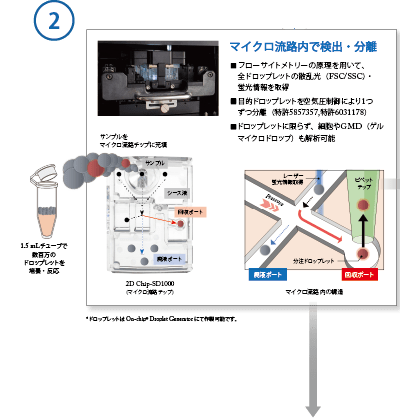 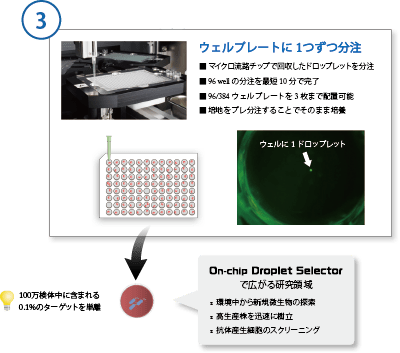 Rhizobia were encapsulated in approximately 5% of the total droplet population and cultured, and droplets containing the grown rhizobia were sorted and dispensed into 96-well plates using On-chip® Droplet Selector. After incubation in the well plate, growth was confirmed in 32 out of 45 wells where rhizobia were dispensed. 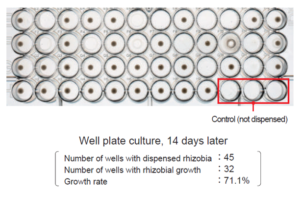 Screening of enzyme-producing microorganisms from the soil

Microorganisms collected from soil were encapsulated and cultured in droplets with substrates that react with enzymes (peptidases). As a result, various growth forms and enzyme activities of the microorganisms were observed.

Droplets showing the target enzyme activity can be isolated at high-speed using On-chip® Droplet Selector, which is expected to lead to the discovery of new microorganisms. 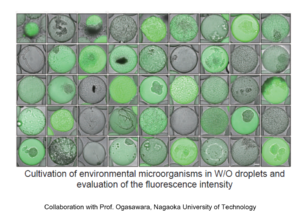 Detection of microorganisms grown in droplets

FNAP-sort (fluorescent nucleic acid probe in droplets for sorting bacteria) is a system that enables the detection of microorganisms grown in droplets.

In the cases where Escherichia coli, Bacillus subtilis, Streptomyces aureofaciens, and Bradyrhizobium japonicum were cultured in droplets, it was confirmed that growth activity could be easily detected as an increase in fluorescence intensity.

On-chip® Droplet Selector can be used for applications such as screening and culturing of environmental microorganisms, and screening of mutant strains. 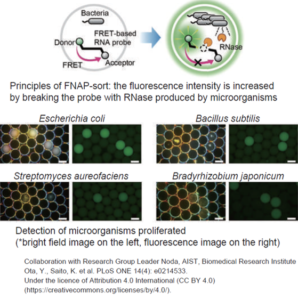