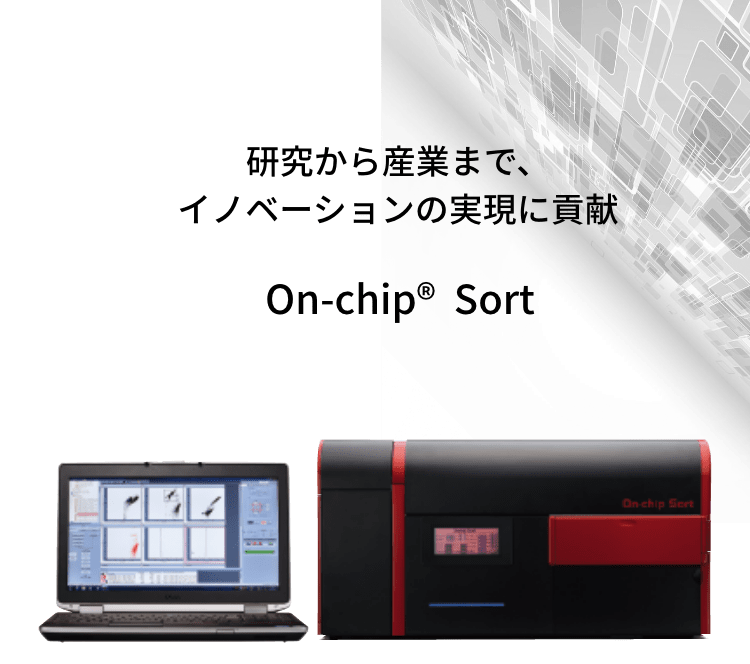 On-chip® Sort is the world’s first microfluidic chip-based cell sorter. Integrating the processes of sample detection, separation, and collection within a microfluidic chip has realized a small footprint and easy-to-use cell sorter. This system contributes to the analysis and sorting of a wide range of samples including fragile cells, cell clusters, microorganisms and emulsion droplets. Our microfluidic technology allows for sorting of variety of sample types including those that were impossible to sort using conventional cell sorters. On-chip® Sort will expand the range of sample analysis and contribute to many areas of science research and to a variety of industries.

Isolation of cells and large particles vulnerable to stress.

Ensuring the enrichment of rare cells— even one cell in 10⁷ cells.

Isolation of cells and large clusters up to 130 μm.

Isolation of water-in-oil emulsion droplets with oil as the sheath fluid due to the ability to use any sheath fluid of your choice.

On-chip® Sort integrates the entire process from sample analysis to separation on a small microfluidic chip with measurements of 5.5 cm × 4.0 cm.

In contrast to Jet-in-air and cuvette-hybrid sorting methods used on conventional cell sorters, the Flow Shift method of On-chip® Sort does not cause damage to cells due to the use of less than flow speed of 1 m/s and pressure of 0.3 psi. The Flow Shift method sorts a target cell by generating a short liquid pulse by pressurization of air to deflect the target cell into the collection reservoir (patent Nos. US10101261, US10222317, US10724938, and US10648899). 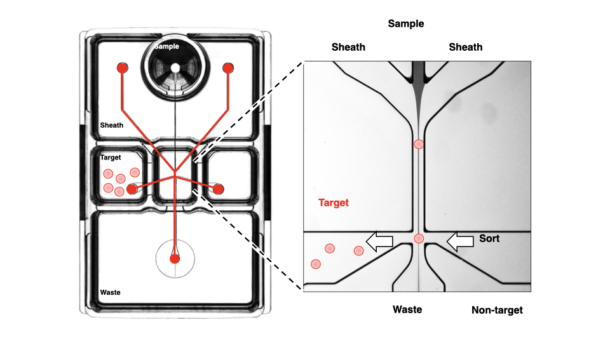 On-chip® Sort’s workflow requires no waiting time and operation is easy and user-friendly.

Maintenance and cleaning are not required on On-chip® Sort as all the solutions on the microfluidic chip are driven by air and hence no liquid will be in contact with any parts of the instrument.

On-chip® Sort is compact enough to be installed in a biosafety cabinet.

Sample analysis and sorting are contamination-free due to the use of disposable microfluidic chips. 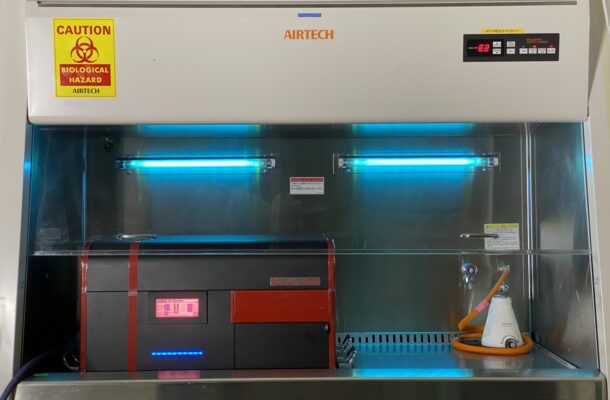 Wide selection of samples and sheath fluids and sample solutions

As cells are sorted using regulation of liquid flow inside the microchannels, hence a wide range of liquids can be used as sample and sheath fluids, including culture medium and oil. 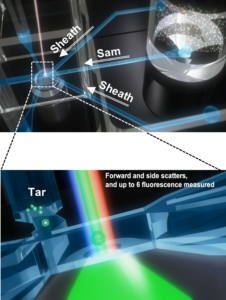 Fluorescence is detected with high sensitivity in a wide range by up to six separate detectors (FL).

On-chip® Sort is capable of sorting water-in-oil (W/O) emulsion droplets and gel microdrops (GMDs).  W/O droplets are liquid droplets dispersed in oil and are stabilized by surfactant. GMDs are droplets solidified using gels. Both W/O droplets and GMDs can be produced by our droplet generator, On-chip Droplet Generator, for single cell analysis and microorganism/cell culturing.

Fluorescence intensity-based sorting following cultivation of a single bacterium enclosed inside droplets allows selective sorting of only the droplets with proliferated cells. 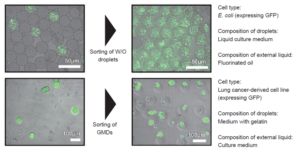 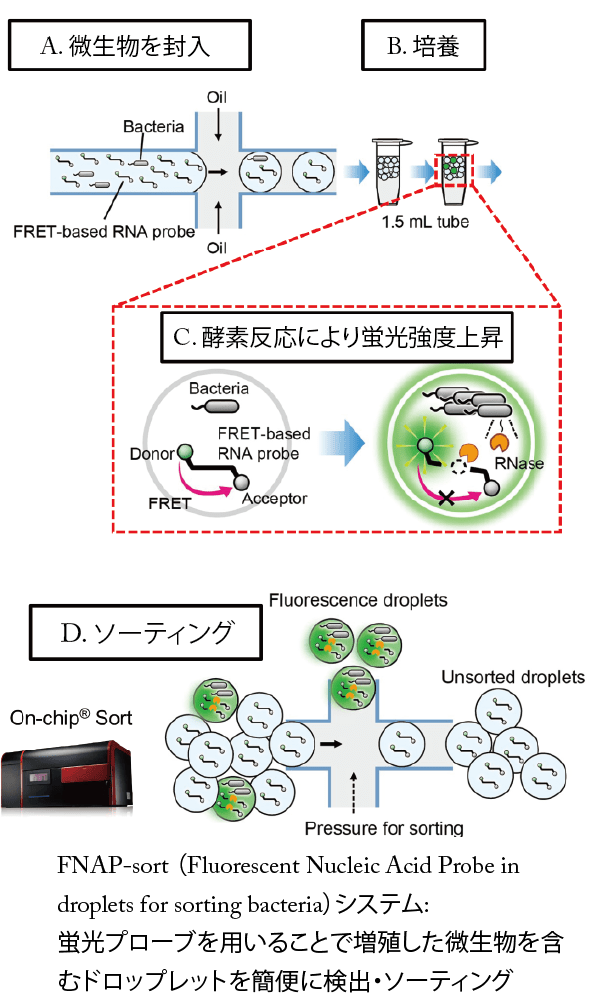 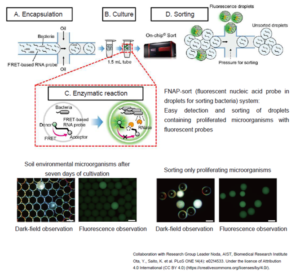 Compared to sorting with conventional cell sorters, sorting using On-chip® Sort has been proven to be less damaging to cells, as it has less effect on cell proliferation, morphological changes, and gene expression. This is because On-chip® Sort employs a unique cell sorting mechanism to eliminate all the damaging steps in cell sorting on conventional sorters. 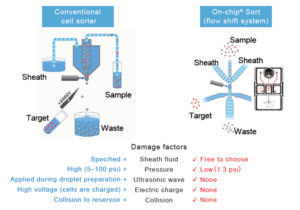 Effects of sorting on cell growth and cell morphology

In comparison to sorting with conventional cell sorters, the cell growth and cell morphology have not been affected after sorting with On-chip® Sort. 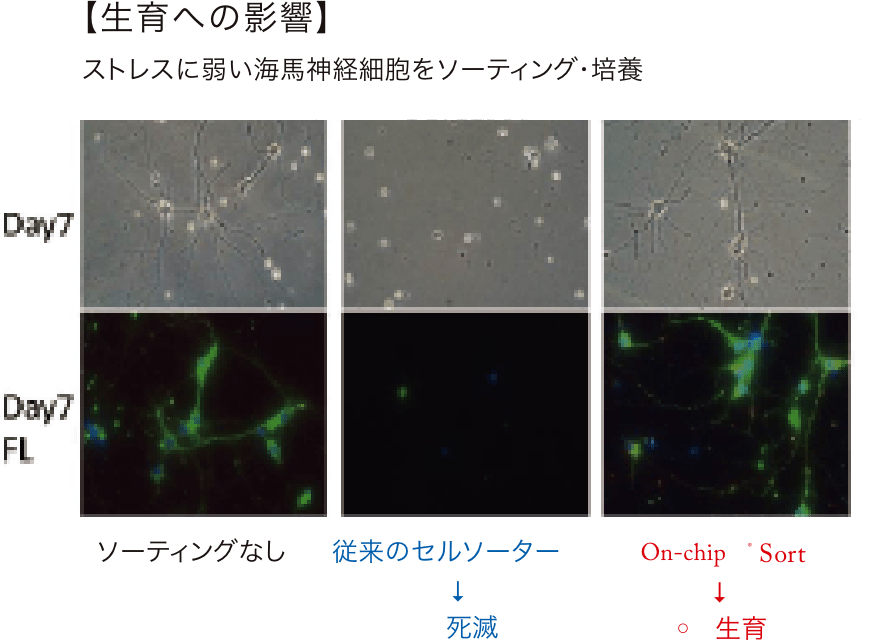 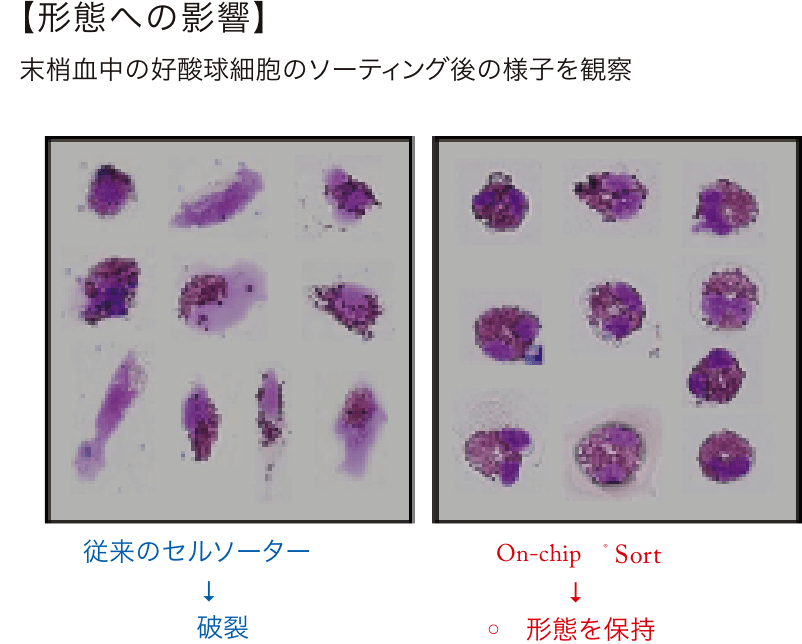 Effects of sorting on gene expression

The changes in gene expression levels were investigated after sorting using On-chip® Sort and a conventional cell sorter. For genes related to cell proliferation and apoptosis, which affect cell growth, it was found that the amount of genetic change was smaller when sorting was performed using On-chip® Sort.

In addition, for all the data analyzed, the number of genes whose expression patterns changed significantly was only about one-fifth of that sorted using a conventional cell sorter.

These results suggest that the genetic change induced by sorting on On-chip® Sort is less than that on conventional sorters. 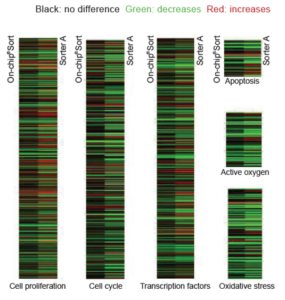 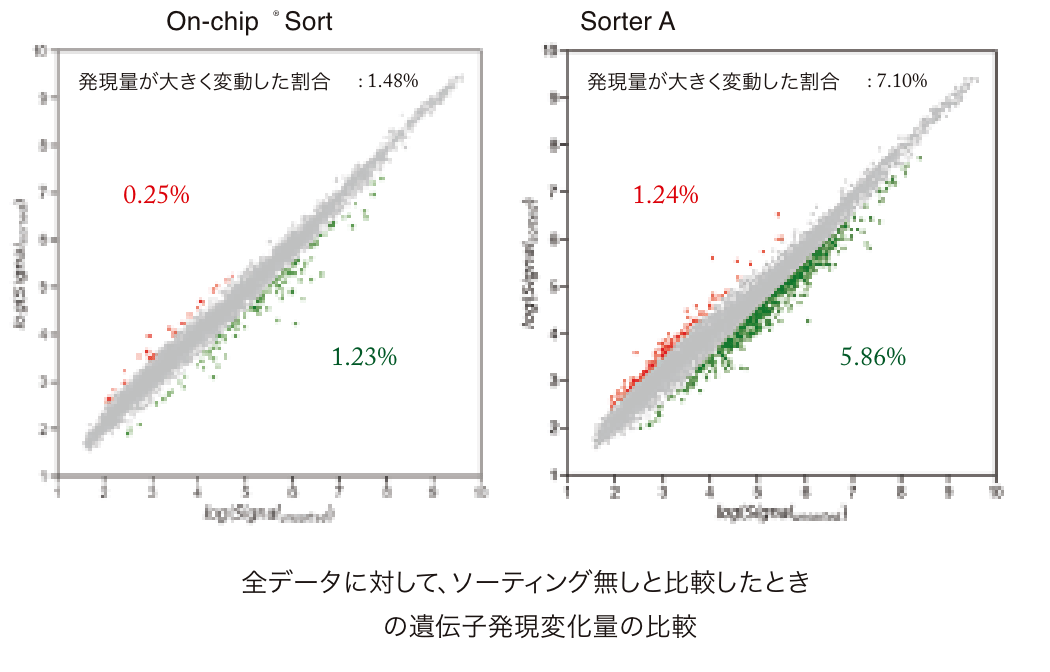 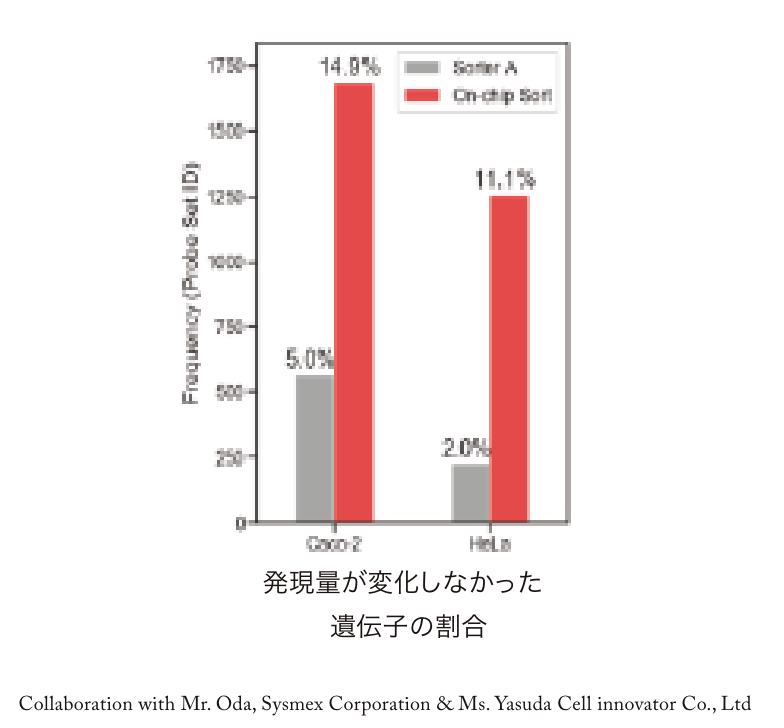 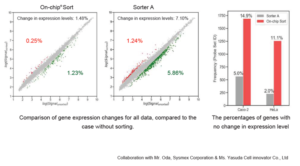 On-chip® Sort enables rapid and accurate recovery of rare cells by repeated sorting of samples. Repeated sorting has always been difficult with conventional cell sorters due to the damage it causes to cells and the inability to analyze small sample volumes, but the use of On-chip® Sort’s damage-free sorting technology and microfluidic chip makes multistep sorting of samples possible. 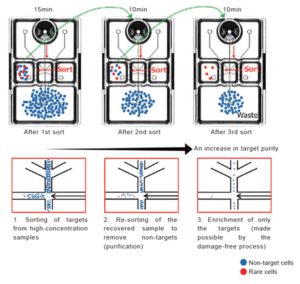 On-chip® Sort allows rapid and high purity recovery of extremely rare cells, such as circulating tumor cells (CTCs). CTCs are cancer cells that have detached from the primary cancerous tissue and are circulating in the bloodstream. The analysis of highly purified CTCs is expected to be used for clinical trials such as cancer diagnosis.

Multistep sorting demonstrated that a few dozen target cells could be recovered with minimal loss from a sample containing 107–108 cells.

A very small number of target CTCs present among cells in lysed blood were specifically stained, and multistep sorting was performed to enrich the CTCs. Microscopic observation after three repeated sorts confirmed that CTCs were recovered with high purity. 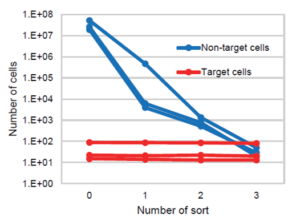 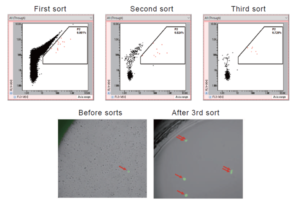 Application 4: Sorting of cell clusters and large particles, and freedom of sheath fluid of your choice

Cell clusters and large particles up to 140 μm in diameter, which conventional cell sorters cannot sort, can be sorted using On-chip® Sort.

On-chip® Sort allows the use of any sheath fluid of your choice, including saline, culture medium, and oil, in order to maintain the samples at their physiological condition and minimize the cell damage during sorting.

The use of spheroids (cell clusters) to assess drug sensitivity is important for evaluating drug efficacy in cancer therapy. On-chip® Sort can sort spheroids of a particular size from a spheroid culture or clinical materials for the purpose of preparing a monodisperse spheroid sample. 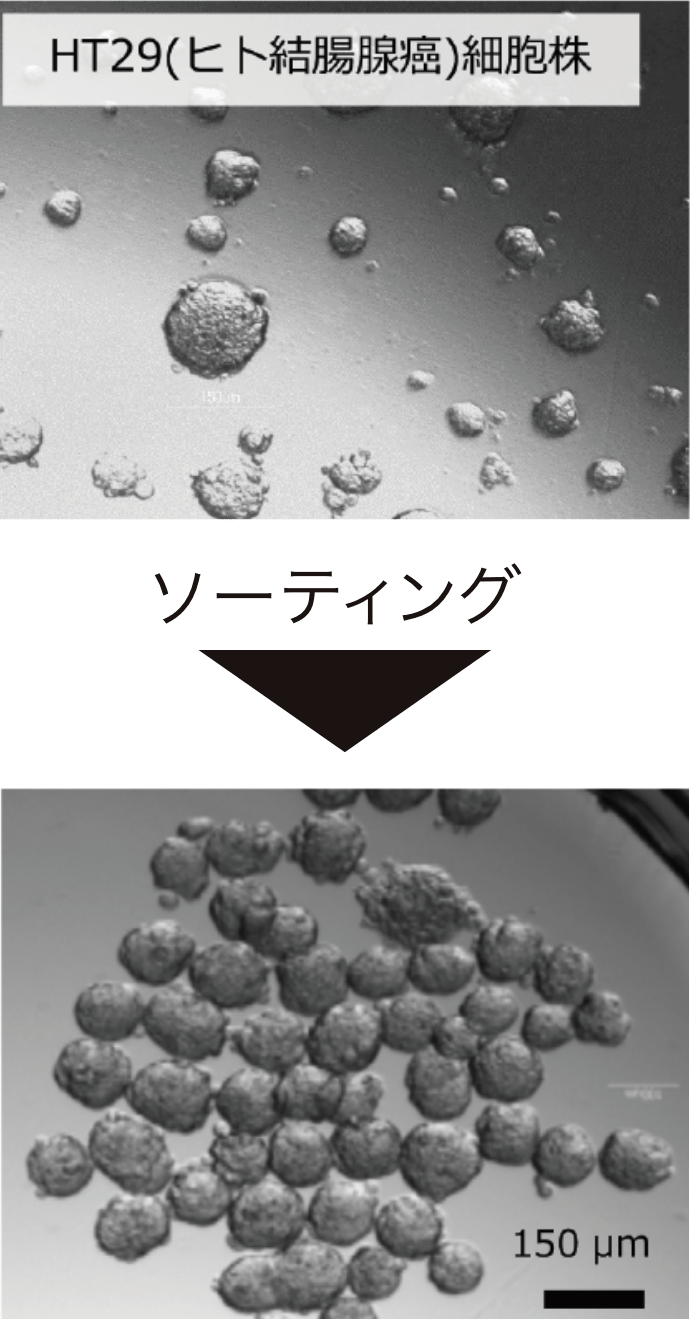 Freedom of sheath fluid of your choice

On-chip® Sort allows choosing any sheath fluid of your choice in order for the samples to be maintained at their physiological condition and minimize the cell damage during sorting.

Termites rely on the protists present in their intestine to provide enzymes to digest the wood materials for food. Using a conventional cell sorter to sort those protists remains a challenge, because some protists are large and a specific solution has to be used as sheath fluid to prevent osmotic pressure-induced cell damages during sorting. On-chip Sort showed to successfully sort out large protozoa. 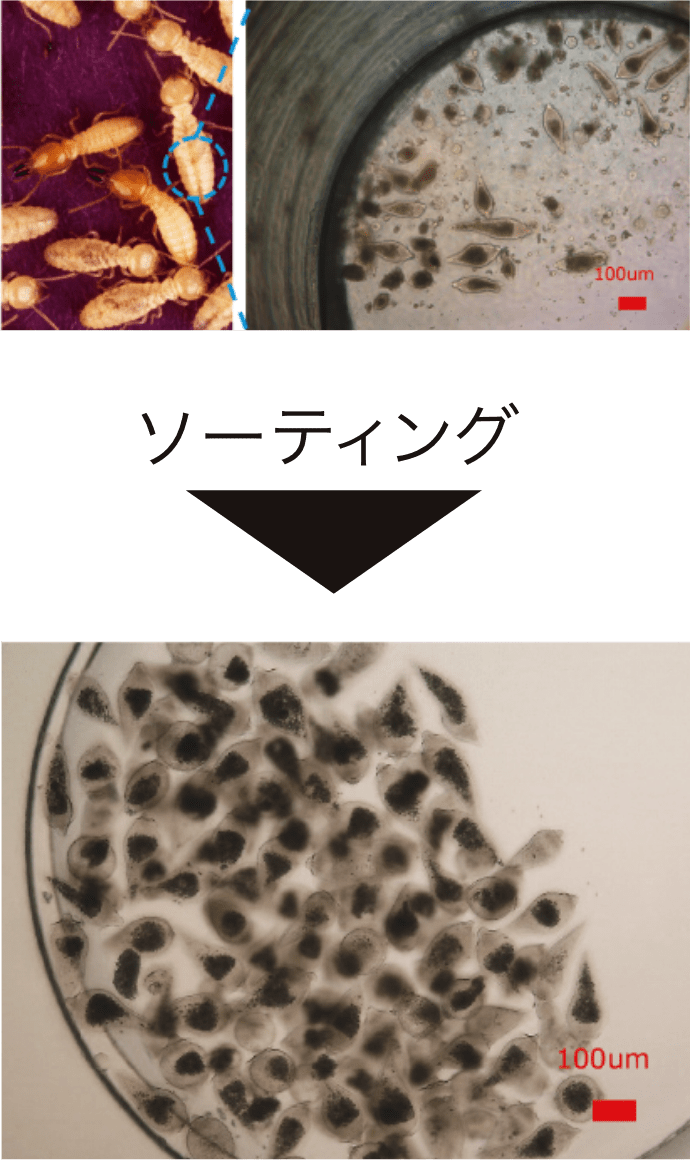 Application 4: Sorting of cell clusters and large particles, and freedom of sheath fluid of your choice

Detectors: Up to six fluorescence detectors FL1 to FL6 can be installed. 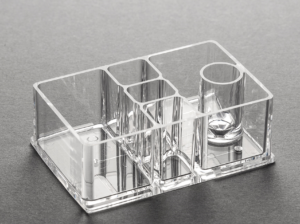 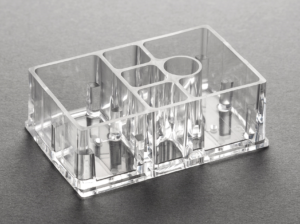