In recent years, single-cell analysis technology has been attracting attention. Single cell analysis requires accurate cell dispensing technology, but the lack of such technologies had been the bottleneck of research. Especially, cancer research involves vast stains of clones and the demand for analysis of each individual cancer cells as well as the determination of subtypes and genetic mutations are escalating rapidly.

Limiting dilution widely used for cell cloning is a simple and low-cost method, but the single cell dispensing accuracy is low and repeated re-cloning operation is required. In contrast, dedicated single cell analysis instruments are expensive and inconvenient for general purposes, while the accuracy is not at a satisfactory level.

Therefore, On-chip Biotechnologies has developed On-chip SPiS in order to solve this problem. It is an easy-to-use instrument that allows dispensing of cells and large particles with single-cell/particle dispensing accuracy of over 90%.

On-chip SPiS draws up 0.2 µL of sample and accurately determines the number of cells within the disposable pipette tip by image recognition. The instrument automatically adjusts the sample to its optimal cell concentration and then the sample is dispensed out on to a well plate only when the specified number of cell in the 0.2 µL buffer is detected. Otherwise, the sample is dispensed back to the sample tube and the instrument repeats this process until the number of cell matches the specified value. On-chip SPiS can be used for single and multiple cell plate (e.g., 5 cells per well). 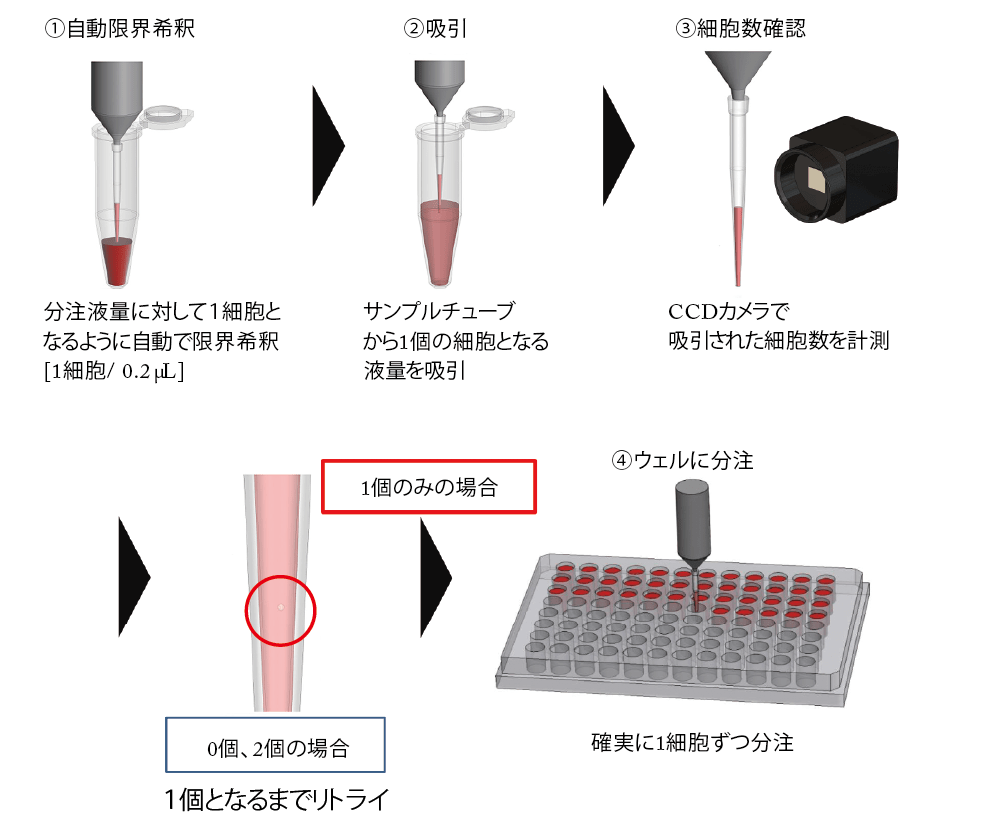 A549 cells were dispensed into 96 wells at 1 cell/well in 54 minutes. The number of wells with a single cell dispensed was 90, and cell proliferation was confirmed in 83 of them. 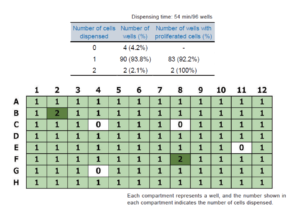 PC9 cells were dispensed into each well at 1, 2, 3 and 5 cells/well and the amount of ATP was measured, resulting in a good calibration curve in correlation with the number of cells. 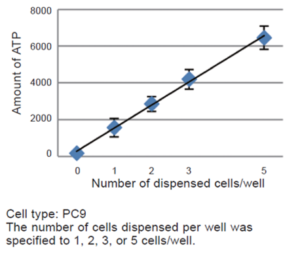 Verification of dispensing accuracy based on the ATP amount

PC9 cells were dispensed into 96-well plates at 1 cell/well. Single cell dispensing accuracy of about 90% was determined by measuring the amount of ATP in each well. 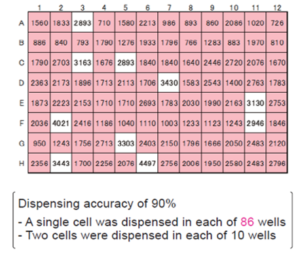 On-chip SPiS is useful for post-genome editing screening. A poliovirus (PV) receptor knockout cell line was generated using CRISPR-Cas9. A single cell was dispensed into each well of a well plate and cultured, followed by viral infection. As a result, 49 clones that acquired PV resistance were successfully established. 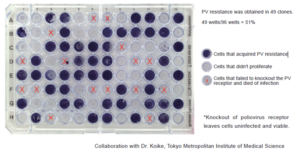 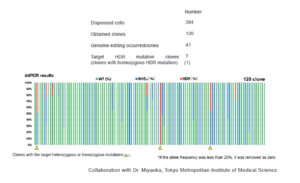 Dispensing of spheroids of different sizes for drug evaluation

The use of spheroids (cell masses) which can reproduce the biological environment has attracted attention in the evaluation of drugs such as anti-cancer agents. Uniform sized spheroids are necessary for highly accurate evaluation. Therefore, On-chip® Sort was used to select spheroids of a specific size and On-chip SPiS was used to dispense the collected spheroids on to a well plate for fast and accurate drug efficacy evaluation. 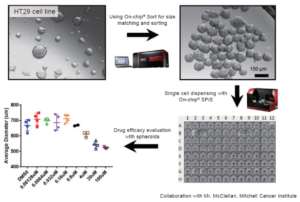 On-chip SPiS can dispense not only cells and large particles, but also GMDs (microdroplets solidified as gels). Bacteria grown from a single cell can form microcolonies inside the GMDs, which can be recognized by the CCD camera in On-chip SPiS. The use of GMDs is useful in screening and isolating environmental microbes and generation of mutant libraries. 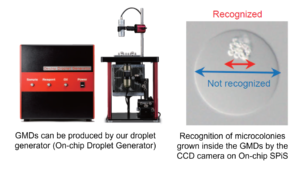 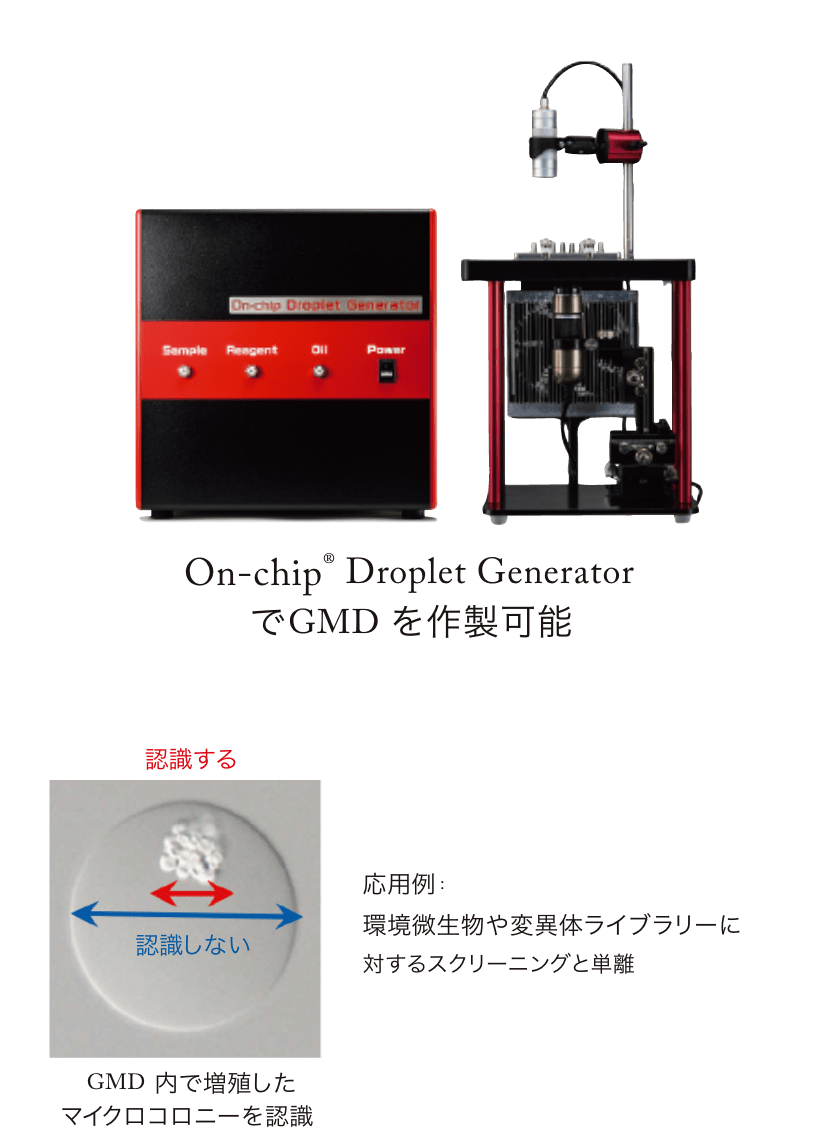 Dispensing and culture of swimming tetrahymena

Protozoan Tetrahymena were dispensed at 1 cell/well into a total of 180 wells and cultured for three days. Single cell dispensing was confirmed in 159 wells, 137 of which had cell proliferation. This result indicates that the system can dispense migrating cells with high accuracy. 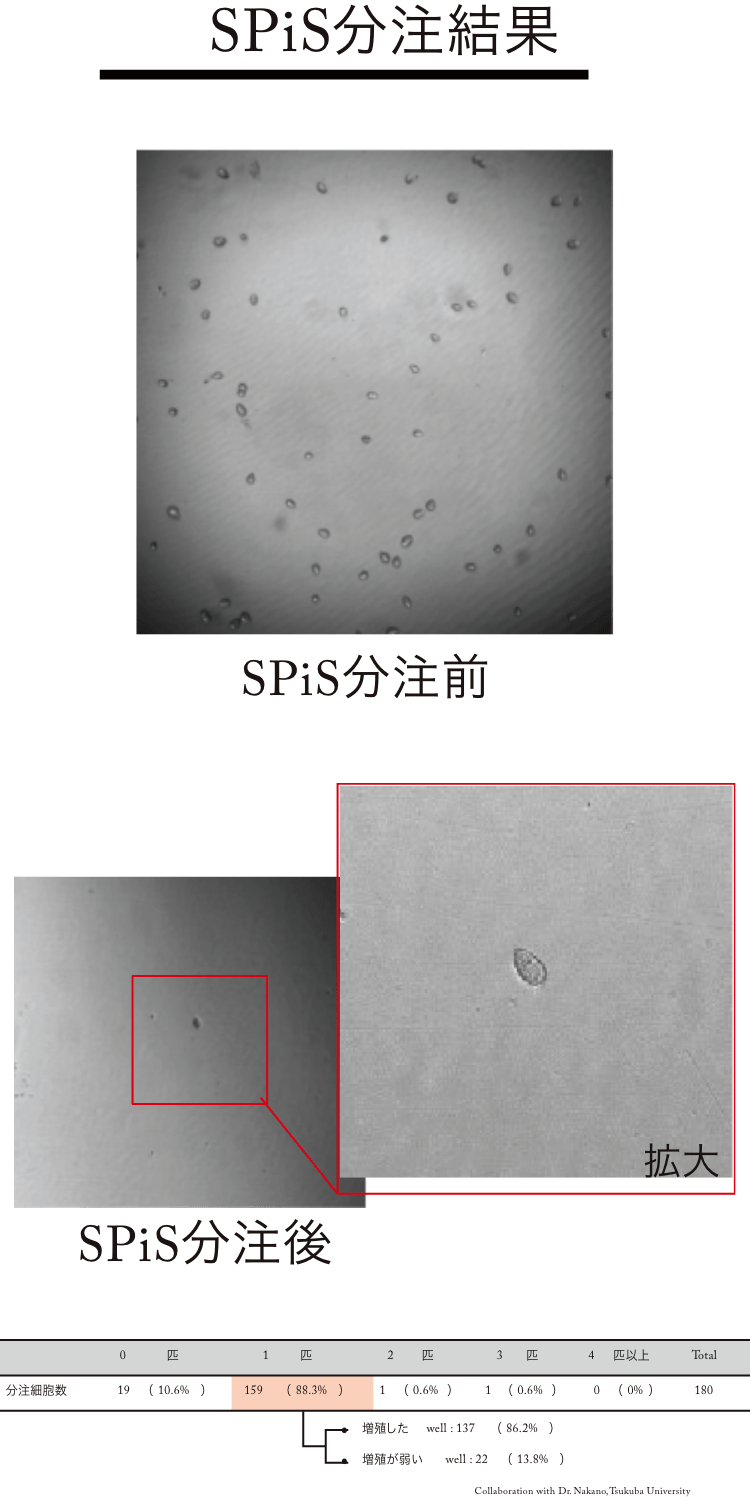 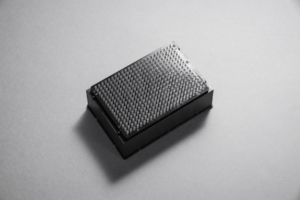